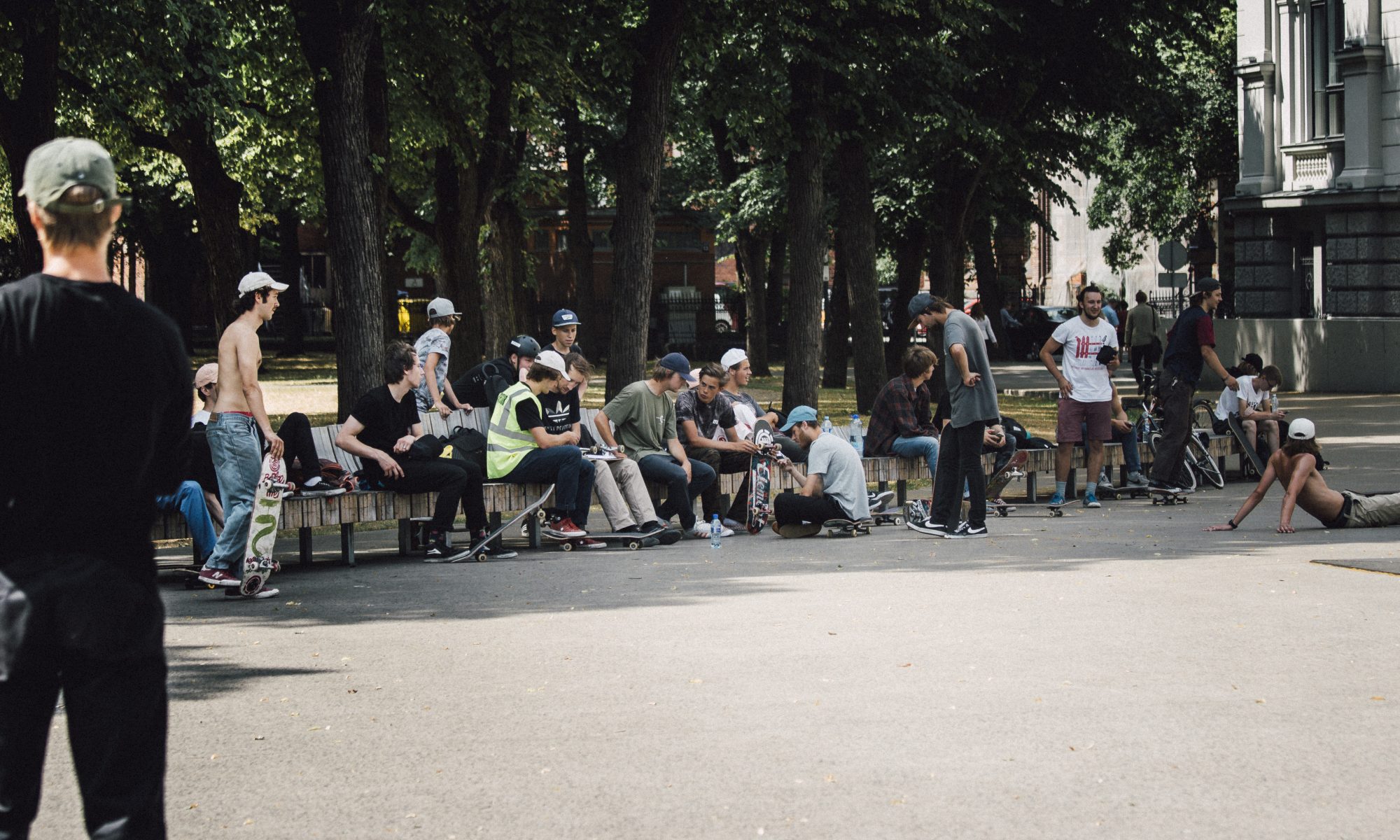 It was a perfect day to go skate, and despite being a working day people showed up. And we had it all: it was sunny, cloudy, hot and of course rainy, like almost all go skate days. The formats this year were pretty mellow, everyone could participate and have fun. We had a game of skate at Museum, best trick up and down a curb at LNB and a skatepark session at Uzvara park. The park was super sick, it was designed to replicate famous skate spots around the world – so we had a mini Hubba Hideout, Barceloneta banks, wave spot from China and a school yard picnic table. Huge respect to Krisjanis Kalvans for setting it all up for us.

Watching insta clips from go skate days around the world I can say that in Riga we are super low impact. We didn’t have much jumping down stuff or handrails, our go skate day was more or less like a walk in the park.

It is pretty cool that all shop throw in prizes and support one event together. It feels like couple years ago stuff like that was unheard of and shops prefered to organize separate events simultaneously. Good thing these times are in the past.

Game of skate was really dope, everyone could play and it made surprising combinations of opponents. In the end it all went down to three guys – Arts, Edijs and Cocain. They had to battle it out till 10 letters. The crowd went wild when only Edijs and Arts were left rolling. They already had met in a game of skate before and back then it didn’t go so good for Arts. This game was different and it seemed that Edijs was done for. Arts had him in the corner with 8 letters and even managed to pull Edijs’ signature fakie double flip. We were sure he had it, until it was Edijs’ turn, and magically he made an epic comeback. Video shows it all, so make sure to check it out below!

After that we moved to LNB and had a best line contest. Dudes had to do a trick up and down a curb. As a result we had a tigh between Reinis Rorbahs and Niklavs Vetra, who both had some nice lines. Session ended with a small rain and later on on the way to Uzvara it poured properly

Last spot was Uzvara parks with specially made obstacles. Everything was wet and rain wasn’t planning to stop. Krisjanis started to hype people up by saying they can get prizes for landing tricks in the rain! Organically it all turned into an intense session. Linards was blasting like a maniac on every spot, nobody told him it was rainig. We had three main disciplines: best trick on wave kicker,  hubba/stairs session, longest manual contest, double box no push line. Make sure to ckeck out the video, it has it all. Shout out to all skaters and organizers! A great event indeed.