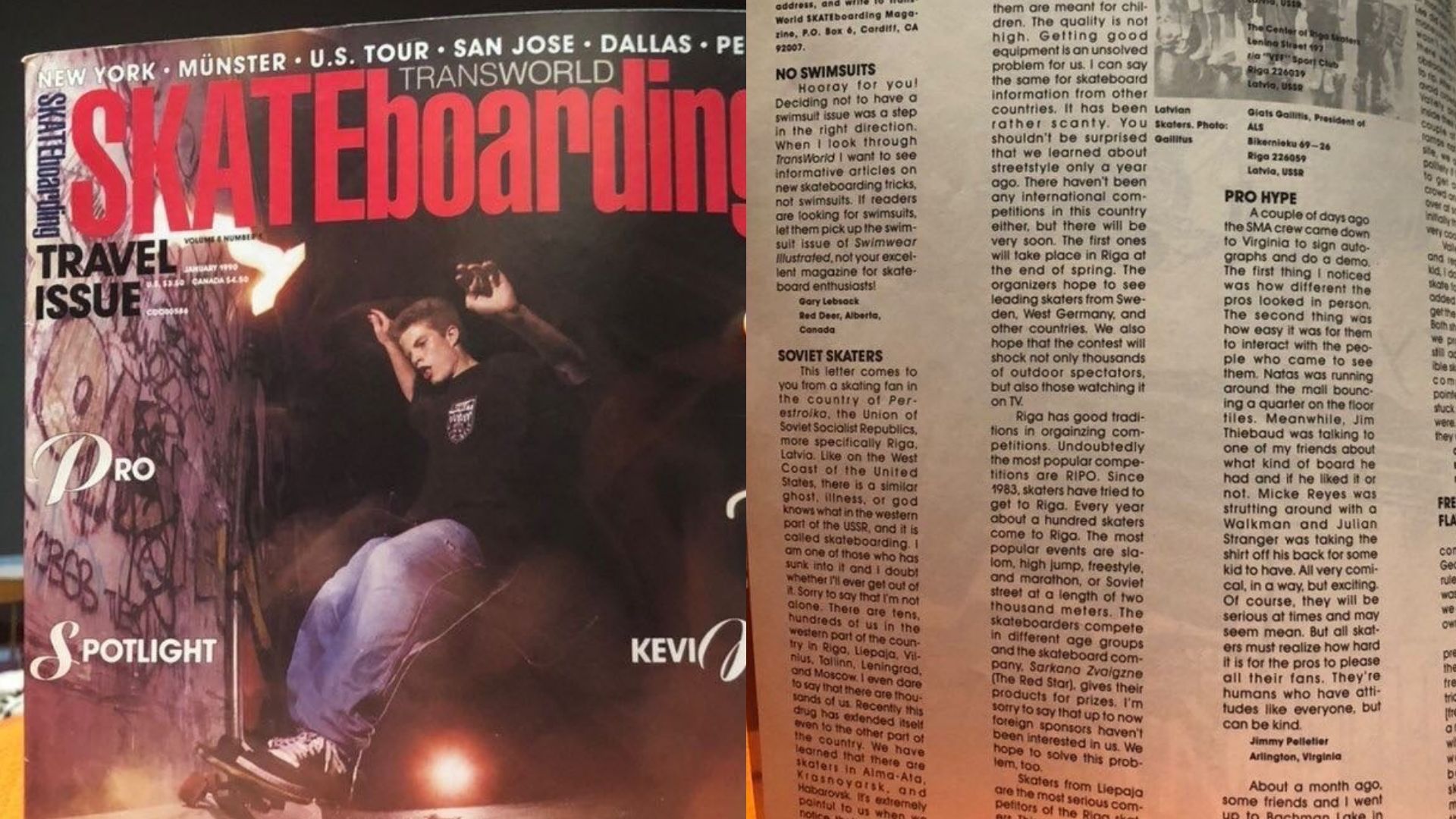 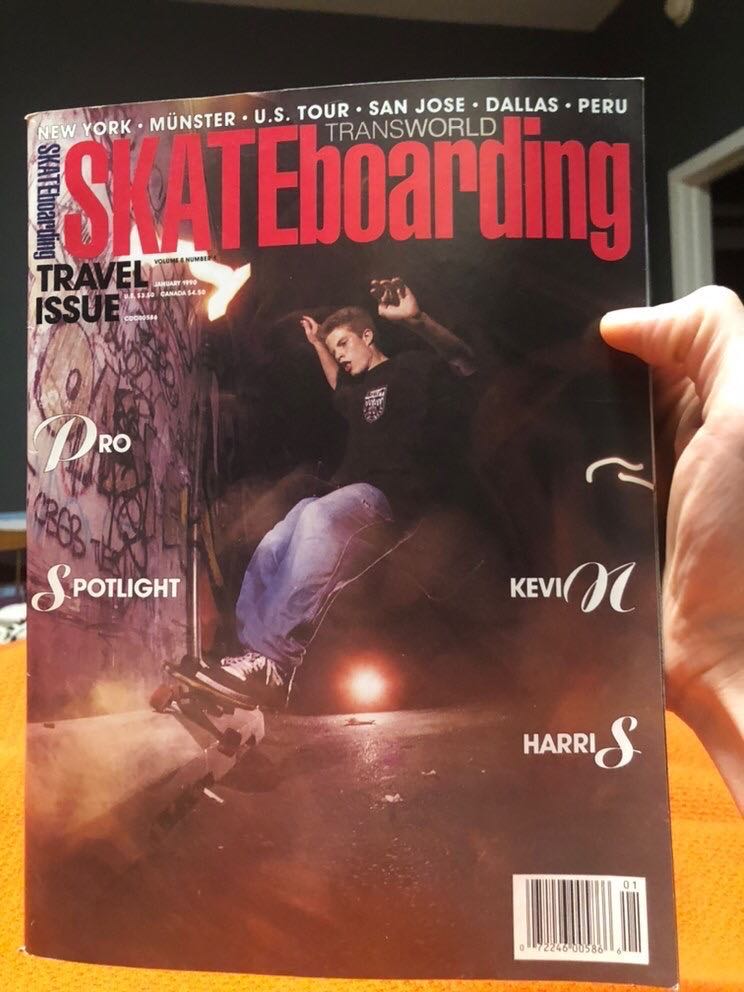 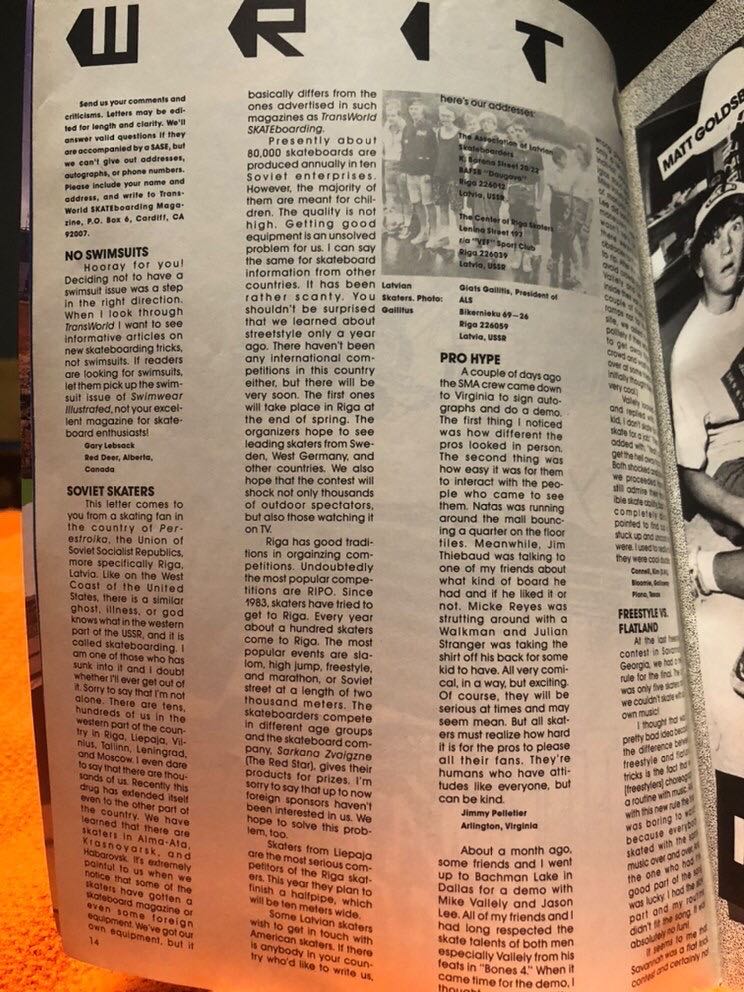 A few days back Madars sent Rajon a photo of a letters section from an old Transworld. The issue dated January 1990 with one of the letters called Soviet Skaters. The letter author was non-other than Gints Gailitis, the president of Latvian skateboarding federation (1989-2011) and a passionate skateboarding  devotee.

This letter comes to you from a skating fan in the country of Perestroika, the Union of Soviet Socialist Republics, more specifically Riga, Latvia. Like on the West Coast of the United States, there is a similar ghost, illness, or god knows what in the western part of the USSR, and it is called skateboarding. I am one of those who has sunk into it and I doubt whether I’ll ever get out of it. Sorry to say that I am not alone. There are tens, hundreds of us in the western part of the country in Riga, Liepaja, Vilnius, Tallinn, Leningrad, and Moscow. I even dare to say that there are thousands of us. Recently this drug has extended itself even to the other part of the country. We have learned that there are skaters in Alma-Ata, Krasnoyarsk, and Habarovsk. It is extremely painful to us when we notice that some of the skaters have gotten a skateboard magazine or even some foreign equipment. We’ve got our own equipment, but it basically differs from the ones advertised in such magazines as TransWorld SKATEboarding.

Presently about 80,000 skateboards are produced annually in ten Soviet enterprises. However, the majority of them are meant for children. The quality is not high. Getting good equipment is an unsolved problem for us. I can say the same for skateboard information from other countries. It has been rather scanty. You shouldn’t be surprised that we learned about streetstyle only a year ago. There haven’t been any international competitions in this country either, but there will be very soon. The first ones will take place in Riga at the end of spring. The organizers hope to see leading skaters from Sweden, West Germany, and other countries. We also hope that the contest will shock not only thousands of outdoor spectators, but also those watching it on TV.

Riga has good traditions in organizing competitions. Undoubtedly the most popular competitions are RIPO. Since 1983. skaters have tried to get to Riga. Every year about a hundred skaters come to Riga. The most popular events are slalom, high jump, freestyle, and marathon, or Soviet street at a lenght of two thousand meters. The skateboarders comepete in different age groups and the skateboard company, Sarkana Zvaigzne (The Red Star), gives their products for prizes. I’m sorry to say that up to now foreign sponsors haven’t been interested in us. We hope to solve this problem, too.

Skates from Liepaja are the most serious competitiors of the Riga skaters. This year they plan to finish a halfpipe, which will be ten meters wide.

Some Latvian skaters wish to get in touch with American skaters. If there is anybody in your country who’d like to write us, here’s our addresses.

Gints Gailitis was the leading man in Latvian skateboarding since the early days of the sport until 2011 when he tragically passed away. Unfortunately Rajon has never met the man. There could have been a lot of things to talk about with such an enthusiast. Now through small pieces like these we can attempt to preserve the memory of the original Latvian skateboarding fan, Gints Gailitis.

2 Replies to “Latvian message in TWS”