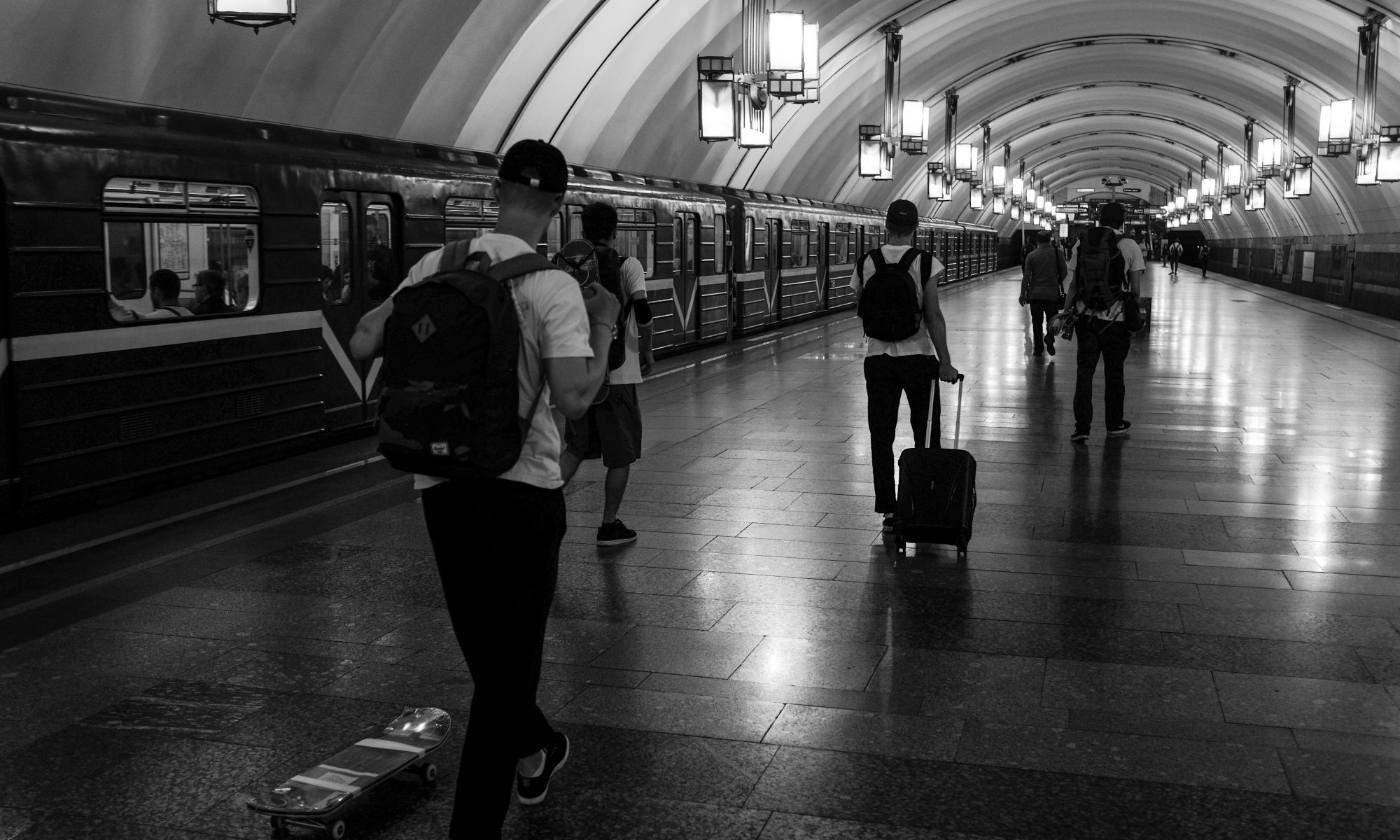 Once again our Estonian skate allies set themselves on an adventurous  journey to a destination less traveled by the Baltic scenes: the vast and far-reaching Russian Federation. Under the supervision of our long time friend Antti Sinitsyn, the crew, consisting of Egbert Pahhomov, Mihkel Vahermaa, Enric Garriga Panisello, Hendrik Hundt, Hans Lange, Martin Kuum, went on a week-long vacation to the cultural capital of the big bear—Saint Petersburg. It is a city considered to have more European vibe than other countless Russian cities, and with its shores washed by our trusty Baltic sea, it must have something familiar that we can relate to. Well, for starters, the city has a lot of ledges, “it is a ledge mecca” according to Antti and we can definitely relate to that.  We talked to Antti Sinitsyn about the trip and about the city, so if you ever plan to go to Saint Petersburg the following interview might be a good travel guide for skateboarding in Russia.

Hey, Antti! Well done with the video. I really enjoyed it, and the music was really good.
Thanks to you, actually! You suggested Kedr Livansky’s music for my video, but her songs didn’t really match the flow. But I stumbled upon a NYC radio show where she was DJ-ing and one of those songs made it into my video. I think the song is from 1997 or 98… anyway, it’s been a while since drum and bass-ish music has been in a skate video.

That is cool, never know where ideas might pop out. So as I know you were the organizer of the trip, did you have to convince your friends to go? It is Russia after all and people are bit scared of it.
Actually I didn’t have to convince a whole lot. I’ve been to Moscow and SPB before, so I just told them that it’s chill and not a horrible place to be. Quite the opposite, it’s a rather pleasing place to visit! Of course for most of them it was their first trip to Russia, so some skepticism was there but half way through the trip they already wanted to make plans for next year to go to some place where normally skaters don’t go. Preferably some ex-soviet country.

I am guessing other ex-soviet countries might not be as mellow. How was Saint Petersburg for you as a skater? It it true that it has a European vibe?
Yes, SPB is very different from Moscow and Russia as a whole and currently those are the only two Russian cities I’ve been in (want to do the trans-siberian pretty soon). Most of the time I felt like I was in Paris or something. At least the central part of SPB is very clean, renovated and looks amazing. And not just the architecture, but also the people: everyone is very fashionable and very friendly. Clearly people are very culturally intelligent there. We only got kicked out once and it wasn’t even from a spot, per se. It was a parking lot that lead up to a spot and the parking lot attendant let us roll up from there for 30 minutes and then was like “Can you please leave now?” Mostly people enjoyed the act of skateboarding, stopping to watch it and nobody seemed to care at all about vandalising public or private property. Cops walking by, waving and smiling. It was very strange! Well, they don’t call it Venice of the North for nothing. So all in all, very modern city, very trendy people and gopnik sightings were at a minimum.

That is so sick. Good insights. What about the language barrier, how did you handle that?
Egbert speaks good Russian, so if things got a bit more complicated, then he would step in and translate. Most of us know simple stuff, so buying beer or ordering food or buying metro tickets wasn’t a problem. With younger people you could also speak English. But talking Estonian on the streets of SPB definitely got some attention and people would ask where we were from and after understanding that we were from Estonia they would be really thankful that we chose SPB for our small vacation trip. I guess they don’t see a lot of European tourists there, especially young skateboarders.

That’s interesting. Did you make connections with some local skaters? There is a big scene there, isn’t it?
Yeah, we saw a lot of skaters at the main plaza spot. Not that much when we were on the streets. But it’s a big city, so I am sure they were all skating the many other granite and marble plaza spots scattered around SPB. Or maybe they just know other street spots that we don’t know about. We mostly stayed in the centre part of the city and the only spot that was further away was the one with the statue of Lenin. That place was like 10km away from the city centre and upon arriving there it still seemed like the centre! That city is crazy big so I am sure there are a lot of skaters, but statistically it’s unlikely to bump into them. About the connections: We mostly kept to ourselves but of course talked to some guys. Actually met one really good skateboarder whose name is Dima Rodionov. I strongly advise to check him out. He recently had a cover for Solo skate mag and you can find him on the internet or on Instagram with the username “zekkomar“.

That is sick, what a great encounter. So did you guys went full skate mode or you have some breaks with cultural stuff?
I found a nice Air BNB in the city centre that could fit the seven of us. Stayed for four nights and the total cost was only 800 euros! For seven guys!

Now there are a lot of cheap places in Russia. A bunk bed hostel type of place would have been like maybe 20 euros per person for four nights, but it was a vacation so we opted for a nice apartment instead. If any Baltic skaters want to go to SPB then I would highly recommend this apartment: https://www.airbnb.com/rooms/16060504

Yeah, about that cultural stuff… man, we were so hyped about the spots that we just skated. The only cultural place where we went was the Winter Palace and just took some photos outside on the square. But as the saying goes (that I just made up), if you’re a skater, you see a lot more culture than a normal tourist! I knew some Soviet style bistros, so of course we had some pelmeni and tarhun. Found out they sell Swisher Sweets in Russia. You know, that blunt cigarillo thing that all the Three Six Mafia guys smoke? Visited a hip craft beer bar also. But 95% of the time we just skated. Didn’t even party. After a long day we had some beers at our apartment, talked about stuff and everybody did a 30 minute stretch routine and went to sleep. That might sound a bit lame, but most of the guys are pushing 30 or over 30, so it’s pretty much mandatory if you want to stay functional. Enric took an ice bath every day and had some kind of weird horse balsam that he rubbed on his feet. Made the muscles hot and released tension.

This is so cool, thanks for the advice too. Yeah 30 means everything is getting a bit harder. In the video you skate a lot of ledges too, can we assume that SPB. Is a ledge mecca?
Yes, SPB is a ledge mecca. Dima explained, that SPB is a very flat city so there aren’t any big gaps or rails or stairs. And since nobody really visits SPB for skateboarding, then all the ledges are nice and crisp. You know how the MACBA ledges are so round that sometimes you can’t even lock into a 50? Yeah, none of that in Russia! SPB is also a very skate-to-every-spot kind of city. Sidewalk surfing is a must!

What about the video? Are you happy how it turned out? There are these weird glitches I never saw before in your vids
After 5 months of production and editing I can say that yes, I am happy with the result! It took at least 2 months to find the song and another 2 months to find the right visual concept for the video. We all know and use those VHS glitches, it’s great and all and works really well with skate clips, but I am always looking for a way to make my videos a bit more, dare I say, innovative? For example my video from 2017. It doesn’t have an innovative visual style, but choosing jazz for music made it stand out a lot. With the SPB video I had this idea to use digital glitches instead of VHS glitches or for example, film lightleaks. You know, the red and yellow stuff if you expose your film to light? These small glitches and interventions work great in skateboarding videos to bridge skate footage with b roll and sometimes to emphasize something to get the viewer’s attention.

Anyway, the colorful pixellated stuff is a free overlay that I found, but some of the clips look really broken. Like back in the day when you would download stuff from Kazaa and it would look all fucked up? That’s digital glitching and the act of making clips look that actually has a legitimate word for it: datamoshing.

At first I tried to do it by hand, so to speak. You would open the video clip on your computer as a coded text file and just start messing with it. Deleting code, writing random stuff etc. Another way to break clips was to open up video files in an audio program and manipulate the data by adding some echo, reverberation, phaser and other audio effects. But the process was tedious and the results were random. Most of the time you broke the clip so bad, that it wouldn’t even work. And if it did work, then you had to convert it through 3 different video formats etc to get it into working order for Premiere. It was a nightmare! So finally I was like fuck it and bought a 99€ plugin that did the exact same thing in After Effects. The perks being that you could control how much you want to break it and if you didn’t like the results you could just re-do them on the fly.

The VHS glitches give you an illusion that you are watching a bad VHS tape with some skating on it. I wanted my video to look like a fucked up DVD disc or a shitty Kazaa file. Same principle, just using an imitation of a newer format.

The song is also a strange choice for a skate video. This being a trip to Russia, naturally I wanted to use Russian music. I asked you about some Russian artists and you suggested Kedr Livansky. She makes some really great music, but I couldn’t find a song that fit well with the visual flow. So randomly I listened to a DJ set from Kedr at NYC and the song I used was from that set. So thank you Kedr! This drum and bass-ish song is from 97 or 98, so it really has that proper raw quality to it. I think it works great with the visuals! It’s a 6 minute song so I had to cut out about 5 different chunks of the track to fit my 3 minute skate clip, but in the end, it fits perfectly! Fun fact: I almost used this song for the video.