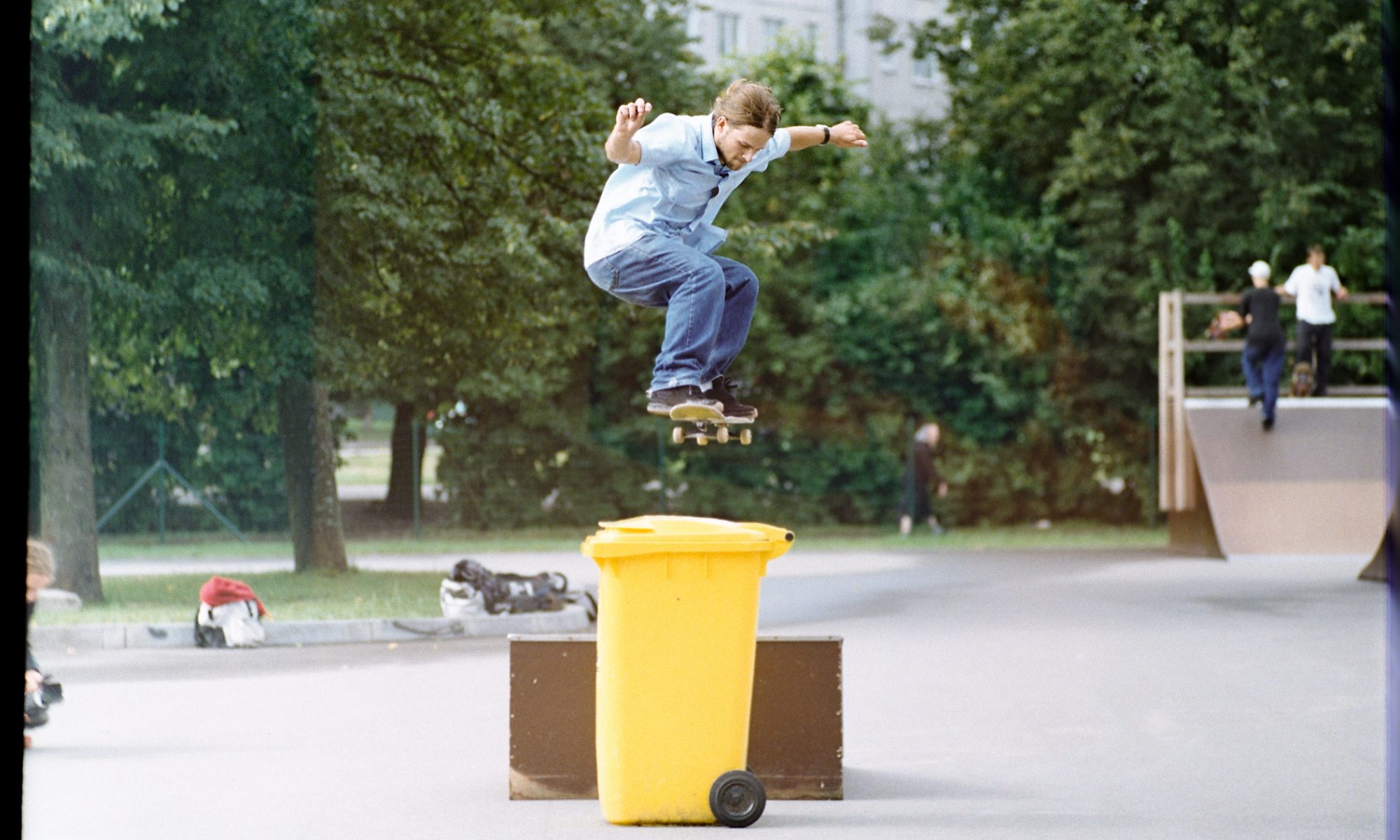 It is the foundation to everything. The coolest trick outhere. The first thing that gets your jaw drop. When you see it for the first time you can’t believe it. You learn that there is no glue or special shoes and that just adds more excitment to it. It is unexplainable yet super simple. The learning process is like natural selection – you either learn it or quit forever. As you master it a hole new world opens in front of you.  We are talking about the fundamental skateboarding trick – the ollie.

For this article we talked to couple Latvian skateboarders about their experience with ollies. Everybody has some interesting stories about the way they learned their first tricks and this section is pretty much about that.

When we started skating we would simply roll off small stairs and curbs.  Actually at first we did’t even know that ollies existed, but somehow we learned them by going up the curbs. We would just raise the front truck and then press on the nose so the back truck would come up as well. After doing it many times and then doing it faster and faster it somehow turned into an ollie.

Some time later we met an American skater called Justin, he was in Latvia with some church or something. We asked him if we were doing ollie the righ way. He said: “Yes”. He also did a kickflip which completely blew our minds. Cool thing back then was that every session would end with an ollie contest. We would stack up boards and just ollie them to see who can go the highest, you rarely see that nowadays.

Listen to full conversation with Marcis below. (in Latvian)

It happened on a rainy day somewhere in 2002 or 3. Me and Spank were chilling at my place, and doing a 2003 rainy day default activity: playing THPS2.  We were not as much playing as watching short clips of pros over and over again. It was actually more interesting for us than playing the game. We sort of made a mutual agreement that Andrew Reynold’s clip was absolutely the best. We got more and more hyped as we watched it and couldn’t sit any longer; something had to be done, that generated hype had to be released somehow! We had one shared complete at the time with my trucks and Spank’s board from T-Market (nowadays Maxima). After it stopped raining for a bit, we grabbed that board and rushed outside. Even though we kind of skated already, neither I nor Spank couldn’t do ollies. But the excitement level was high and a feeling that something was about to happen was definitely there. Spank was super confident he struggled for sometime and popped his first one. I was shocked and jealous at the same time. How the fuck did he do it? I tried as well but didn’t make it. After that we started to skated more and more. But I can’t really remember my first ollie at all. I can remember Spank’s ollie but not mine. Later we met Didzis local who had the highest ollie in the rajon. He would ollie three boards no problem. He was our ollie mentor.

Niklavs Vetra
Everyone probably knows that I love to ollie and I love to pop up to ledges, rails, stairs or whatever. I have never trained my ollies or thought about the correct technique really, pop just kind of came to me one day. First ollie for me came hard, I was 11 years old when I got my first board and at that point I used it more to roll down a small hill next to my father’s house. I did not think about trying tricks on it until son of Ainars Bagatskis (a famous Latvian basketball player), who’s name I can’t remember, and who lived right next to my house, showed me the basic movement for the ollie. I think it took me 2 days to finally land one. After that I was hooked!

Afterwards, my second skateboarding mentor was a good friend of mine, at that time, Reinis Cukurs, he taught me the basics of skateboarding in general, first skate videos and everything, and of course helped me improve my ollies. I don’t remember any milestones, but with him it was the first time I managed to cruise down the street popping off and on curbs, I remember the hype!

After that my first real ollie milestone happened at Dzintaru skatepark, where I managed, I think, to pop over 4 or 5 boards from a supper small kicker, that was the moment I understood that I can ollie higher that most other skaters. I remember, that it was Toms Berzins birthday that day, shout out to greenhood, NEED, and my brother out there living in Berlin!

Now about the ollie! Like I said, I have never trained my ollie, but I think squats, and pushing on a board or riding a fixie bike helps you, because you train you leg muscles with all that! The only thing, for me, that helps me pop higher is to put my back foot further on the tail, almost on the edge, (push me to the edge, all my friends are dead), because I feel like you can do the popping motion faster like that, and therefore you can ollie higher as well. But I don’t know, test it, maybe it works, maybe it does not. It is important to feel comfortable on your board, be its master, so you can take notes of what works for you better and what doesn’t.

What is the meaning of ollies in my life, you ask? It is everything I NEED AND WANT IN LIFE! It opens more possibilities while skating, it boosts your ego, but the down side is that everyone will always look at you to do something when there is pop involved!

Karlis Bogustovs
When I wanted to start skateboarding all I needed was to be able to move around with the board, just have that cruise control. When I got my first proper “Roces” (rollerskate comp.) skateboard, it wasn’t what I expected. It was difficult to do the things I had imagined. But somehow I managed to get my board on a curb the first day. I remember it was raining and the Ollie took me a few hours. After all the efforts, an old lady was passing  by and said something like: “good job girl!”I had long hair then, and the people who categorized genders by the length of the hair were still alive. It’s a rare phenomena these days. But my Ollie got developed over time; I even did get some local records. The craziest Ollies were from first year of skateboarding. When I was skateboarding for about  10 months, I already had landed an Ollie from third drop of “Uzvaras” monument and 11 stairs from the 11th trams final stop (near old Riga). That was something! Then I wouldn’t know what was going to happen during these attempts, but for public preview I have two of my most crazy incredible Ollie stunts to tell a story about.

First one was in “Žurku midzenis” a ghetto spot behind “Domina” shopping center. It’s not a perfect spot you would skate every day, but the run-up was quite good. We were going on a regular photoshoot with Mārcis Ruiķis as a photographer, Egons Avots as mentor and trainer and Toms Bika as filmer. Krišianis Kalvāns was skateboarding that day as well. Firrst we skated the regular flat gap over some stairs you can see in the video. And then somebody noticed that big gap and said it was possible. I had to give it a try and after that I was just going for it. What I remember was that I went of track for a while, almost wouldn’t make it because of too many attempts. Then master Egons came over and started teaching me flatground f/s biggies and made me forget about the problems I was having with the ollie. Soon after I did it and it was so easy that I thought what the fuck was I doing there. Mārcis gave an advice to do a kickflip, but I was done for that day. Now I regret it, because I had no real damage to keep me from it and now the spot is gone. It was 2011, right before the apocalypse.

Second one was a couple of years later, after the apocalypse. The spot was there for a while, I remember passing it by on one of the “Wild in the streets” events. I wanted to get it, but didn’t want to make it the last event of the day, so I skipped. We came back, in early autumn, this time I don’t remember the the group or who was involved in this. Mārcis was the photographer as usual and Jānis Dzirnieks was the filmer. We were filming for the monthly Boards.lv episodes back then. I had no problems with getting ollie anywhere I needed, and if there was a launch ramp, it would be a bonus.

Luckily, this spot had a small lunch ramp, but this launch ramp was merely a curb cut made from regular Latvian cobblestone. So it’s really small and easy to miss. Best part of the spot is that you can get as much speed as you need on the asphalt and the landing is large enough to feel safe enough. And it’s a tram station, the whole reason the spot is there is because of the station, that’s why you have to fight all sorts of traffic, people, trams and have to watch for cars, because if you shoot out while landing the board has a 50/50 chance of surviving. I don’t remember how long did it take, but not much. Aaa, Maksims was there too. He was just chilling, probably saying: “ha-ha-ha-ha-haaaa!” That was very popular back then – laughing for health.

Those who remember me skate, know that I really enjoy jumping down stuff and this was how I stood out among other skaters. The biggest thing I have ever ollied was Dole’s 14 stair set. First time I saw these stairs it seemed that I can’t get that far and it is impossible. But as always all you need is one try to understand that you can do it. It took me three tries to ollie Dole’s 14 stairs. I remember feeling fantastic after doing it. I always felt great after doing something I was scared to do.