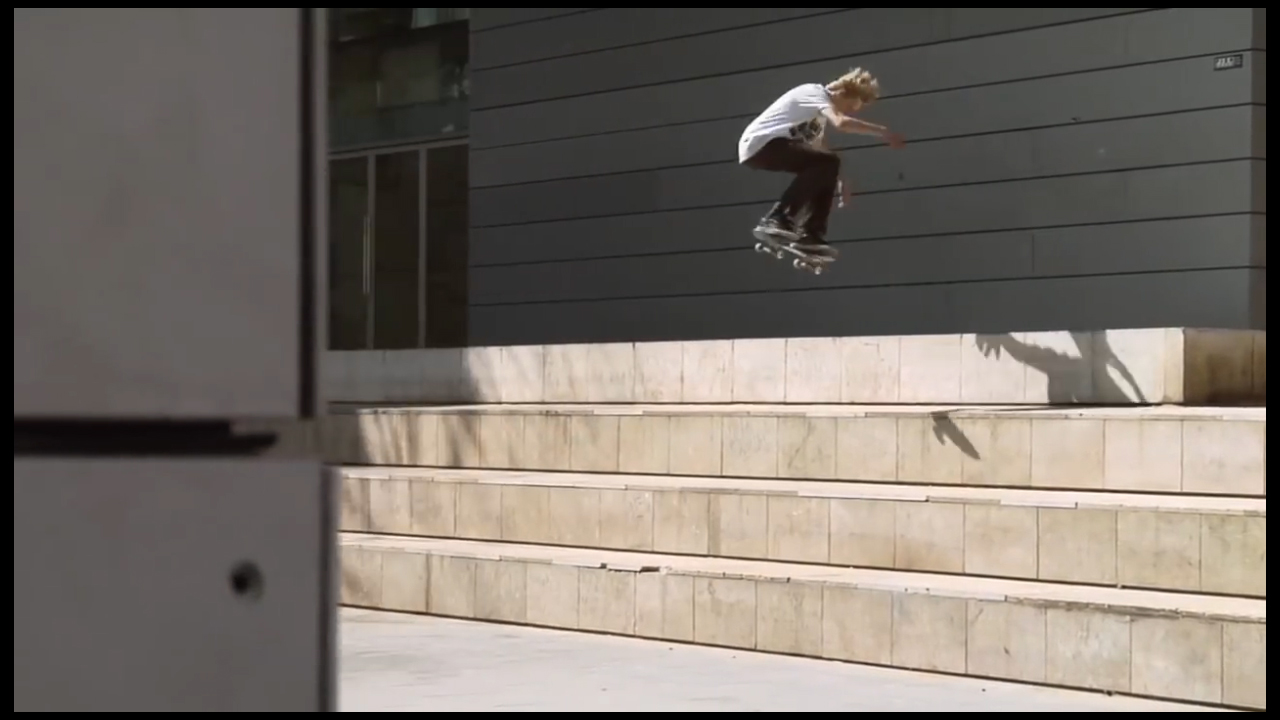 Barcelona’s Macba Big 4 used to be one of the most famous gaps in the world. Its convenient location, no bust, appearance in countless videos, virtually unlimited run-up and roll-away made it into an iconic world-famous spot. Back in the 2000s Barcelona was the main destination for filming trips, and Big 4 was an obligatory visit. Spot wise it was basically a very good-looking drop, and back then drops and gaps were very important. People filmed there a lot, and Big 4 appeared almost in every video.  Pros were eager to show off their sack capacities, and Macba Big 4 was one of the finest places to do it.

And now imagine to see one of your friends skate there, and actually pull of a trick at a legendary spot like that? Pff . . . dope! For a small scene like ours, any trick done at a world famous spot is a banger! And recently Mr.Boga did a halfcab heel  at Macba which made me thinking: what were some other tricks Latvians did at that spot? Of course there were some. Latvian homies, like the rest of the world, have traveled a bunch to the capital of Spain’s Catalonia region, and some of them managed to land some tricks down that yellow four stair, Madars even did some NBDs.

The frist time I remember seeing this spot in a Latvian skatevideos was in Sea Side Sk8’s Legalize. There a younger Rudolfs Baltiņš tossed himself down the marble beast, slammed a bunch of times, and as I could see in the video he didn’t make it. This trick was in the slam section of the video. It still caught those times when slam sections were a thing in videos.

After that Macba big 4 was spotted on the cover of Latvian Thrasher –  Triecienspeks magazine issue 7! It was Jazeps Podnieks with his signature trick at the time – early grab cannonball. It looked perfect for the cover. Jazeps was not only perfectly caught midair by Maksims Kalaneps, he was also wearing sunglasses, smiling in the frame and had Hello Africa written on his board. All of these elements made a hippy induced cover, which probably  boosted the sales of the mag that month.

It was a bit of a struggle to find the video of this trick. Shout out to Niks Kolosovskis who filmed it. As far as he remembers this clip was not used in any edit or video.

This clip of Jazeps represents the spot pretty well. I also asked Niks wheather he tried anything there? “I tried  a fakie varial flip” Niks replied. For anyone who remembers his heydays it is not even a suprise, and also his fakie varial flip is legendary.

Also that same issue of Tricienspeks, as far as I am concerned, had another photo from Macba, this time it was Karlis Bogustovs with a trick only he could do back than – a tucknee.

This was the pre-smart phone era, and nobody filmed this trick. At least Karlis doesn’t remember anyone filming it. He has one early grab filmed at Big 4. Also film credit to Niks Kolosovskis.

Then Madars went to Barcelona. . .

This perfect bs 360 is retrieved from Maksims Kalaneps’ Good Times video, which I didn’t manage to find on YouTube. There are too many skate videos called Good Times. It is probably the most used title for a skate video, along with Locals Only and Concrete Jungle. Anyway, I have uploaded it and here is the link.  Madars was already really good back then, but after seeing this bs 360 it was clear that he is more serious about his skating than the rest.

And then Madars moved to Barcelona. . .

This nollie bs 360 from Madars’ part in the Vans video that no one has ever seen. It was the Vans Euro video called 1966 and Madars had a part in it. He organized the premiere in Riga and it was one of the frist international video appearances by Madars, and we were stocked on it.

Madars had the openning part in Element’s Get Busy Living video. And this 360 shove-it was stomped in the middle of the part. Back in 2012 360 shove-its were cool for some reason and I believe this was an NBD at the spot. Sick.

The spot is a bit smaller now, meaning there is less risk to break yourself there. However, nowdays people skate so good that all possible tricks were done just in one session.

There must be some other people who skated Big 4, if you know anything let us know.

SECOND ROUND FIRST EPISODE IS COMING ON SATURDAY!

One Reply to “#lvskatenostalgia: Latvians at Big 4”