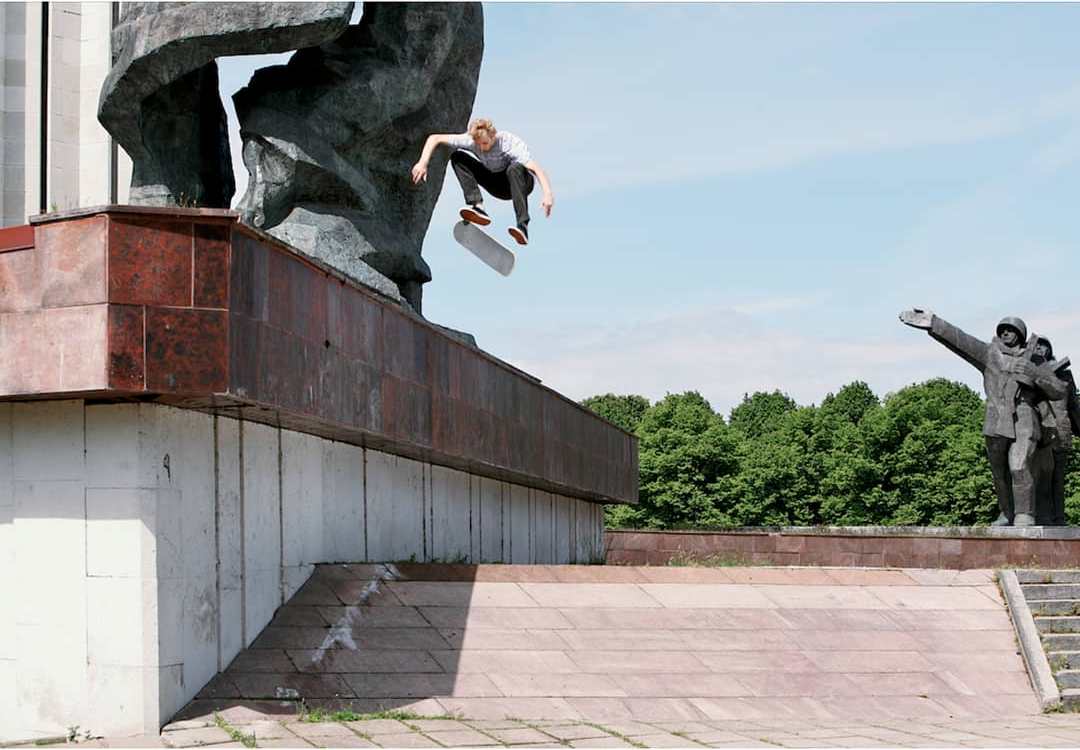 We have some links for you to enjoy from the first month of 2018, and not only that we will throw some more stuff in the mix from December as well and February.

Our Game of Skate Champion and Latvian skateboarding’s best son Madars Apse dropped a massive kickflip at Uzvara into the bank. It is approximately a two meter drop into a bank. The photo made it to Thrasher magazine to accompany Madars’ interview, which we are looking forward to read if someone can supply us with a copy. Photo was also mentioned by our new homie Jamie Foy in a first look vid. However, the dopest thing about all of this is that our man Marcis Ruikis shot that photo, so we would like to congratulate Marcis on getting a photo in Thrasher magazine.

Okay, back to reality. January was a pretty cool month for Lithuanians. Now Vilnius has a new place for skaters to spend cold shitty winter days. New spot is called Core Indoor, it has opened its doors on the territory of Commune DIY  and as far as we can tell is run by the same people. The park super low impact and looks like fun to skate. It is made exclusively for skateboarders as well so sounds legit.

Kaunas gang Fully Ghetto, which we talked about in one of our previous articles, turned into a board company. We asked Domantas Antanavicius to confirm on that and this is what he replied: Dayum right G! Which means that Fully Ghetto is a skateboard company now! Crew released two board models which you can buy at Clockwise skateshop and . They also released a video to announce the release.  We are stoked for Fully Ghetto gang and are looking forward to see what will be next!

Speaking about board companies Latvian Straight Forward skateboards are still alive and kicking, so don’t forget about them! The company plans to return this year with a fresh board stack and a video project. At least they made a claim like that in their recent post.  You fuckers better do it right!

Andis Vanadzinš from the legendary Saldus Saldie crew is kicking it in Berlin right now, doing some mega lines in some expensive ass indoor parks. We are happy for you man.

Speaking of expensive ass indoor parks, you probably noticed by now that Monster Park has closed its doors and left the building. They moved to a new location, and as rumor has it: new place is going to be much bigger than the previous one, and it will have some top-notch state of the art equipment to train future athletes. Like this artificial ”kinda” wave thing. ¯\_(ツ)_/¯ Can’t wait!

Our friend Roberts Krums is cooking, or by now has already cooked a video. There is a dope trailer for it and we are looking forward for the full upload!

Congrats to Raul for becoming the Estonian SOTY 2017. We asked Kataloog’s head Antti Sinitsyn why he chose Raul this year this is his response:

Well, everybody’s skating was very good, but he was just the guy who took it up a level, you know?
You can be really good at skating, but to be the Estonian Skater of the Year you kind of have to do all of the good skating, but also make it stand out.
After witnessing Raul back lip the LNB rail in the dark we totally agree with this pick! The man deserves this title! It looks like the Estonia SOTY party was a blast as well.