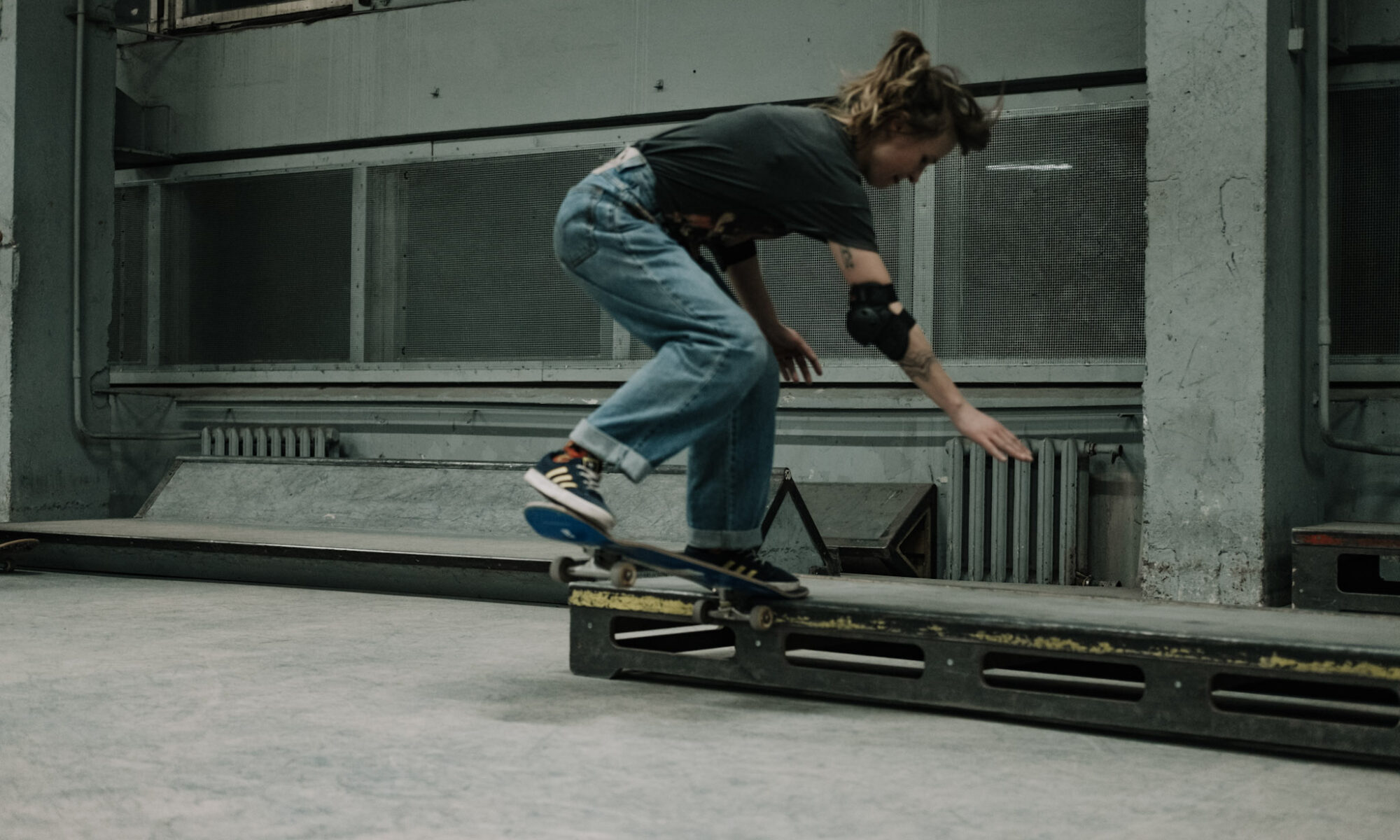 While the world is shaken by global insanity and absurdity, I try to maintain common sense by learning the basics of skating. As the prices for utilities and the indoor continue to rise, I look at my worn-out sneakers and they show that I’ve been active on the board, the life of the sneakers slowly depletes before my eyes. Glad I won’t have to pay for skating anymore.

One dark winter evening, I went digging in the history of skateboarding and came across girls skateboard mag from the 90s called Equal Time. It didn’t seem too popular and was really pro feminism, but it probably had to be so back then. You can read an interview with Saecha Clarke, the pioneer of women’s skateboarding at the time. She is considered the girl who did a boardslide on a handrail and it is the first documented one. I enjoyed the interview with her. She mentions that skating is for everyone and that she does not feel that it is specifically a guy’s thing. Honestly, I have never had to face hate either, however, when I go to the skate park, I have noticed girls who come to public sessions and leave because they can’t find a place. I have heard: “we do not want to disturb”, “there’s too many people”, “I feel uncomfortable, I do not know anything”. This mindset is hard to change. I, too, have felt awkward, often coming to the session with a voice in my head telling me, “There’s no reason to even try, I will never skate as good as Cata Diaz or Breana Geering,” however, I didn’t analyse too much and still went to the session. Skateboarding for me has helped a lot this winter in some deep mental way and it seems to me that we are building something potentially fun for the summer with our girls’ only evening sessions.

Before I started skating, I always liked skateboarding very much. I admired my homies who after a hot night at the bar, at dawn would randomly session and actually land tricks?! Or all the community events that will be remembered as slamming against asphalt and raising each other’s creative work in the sun. For a long time my brain couldn’t even keep track of what exactly was going on with this board, but it looked dope. That’s why I was naturally interested in women skateboarding. It has been easier for me to perceive their body language, perhaps because the level is lower and it is easier to read what is being done or somehow easier to perceive the information. I don’t know, but I won’t forget how the magazine Transworld Skateboarding November 2016 issue had Lizzie Armanto on the cover, and that issue mostly consisted of interviews with the top girl skaters of that time. This was their first issue with a woman on the cover. I knew I needed exactly that issue and asked a friend from the USA to send it to me. I still have that magazine and I still keep it as something special. Probably as a fragment of the global history of women’s skateboarding. In the summer of 2019, the film “Gizmo” was released, it was the first film with a girls-only crew and was created with big brand’s support (Nike). It was summer when I just changed my cruiser for my first skateboard, which I got from Graņa (thanks, dude). I remember watching the movie for the first time and the first part is of a Swedish skateboarder, Sarah Meurle who skated to the Broadcast-America’s Boy. It got me so emotional and my body was covered in goosebumps, seeing Aori Nishimura, Lacey Baker and Elissa Steamer – it just blew me away. I watched that movie about five times in a row before going out that day and America’s Boy was my most played song that summer. It was summer when I couldn’t ollie yet, but it gave me confidence that I would learn, and I did.

I have thought for a long time that it is impossible, with a few exceptions, for girls to learn how to skate, that perhaps guy’s hairy legs give them some special aerodynamics, but the more I saw real examples of women skateboarding, the more I began to believe that it was possible.

By that I want to say that I think it is important to share your progress, to create videos and photos, to see others and yourself. Yes, there have been comments before that you don’t have to film your beginner’s tricks and pollute the internet, in which case I’m a trash bag because I like to share my progress. I’m happy for every Latvian girl who puts on a story or post her tricks – it really motivates me. Does it motivate you? Beginner’s trick clips, for me as a beginner, help me better understand the trick, in a way, I see the starting point of the trick at its evolution. It is exciting to see Lithuanian and Estonian girls sharing their progress and see what tricks they are doing and sb.girls videos also have their own style. I like to romanticize that audiovisual material is an important testament to time. Pictures, clips, drawings, magazines, books, stickers, it’s all content that makes up culture and the more authentic the more alive.

I have already finished the article forgot about it, but then I remembered that in this fragmentary historical essay I would like to mention a very special Latvian skateboarder. Many definitely know Ingūna Skujiņa and if they don’t know, then they should know, because Ingūna is a girl who entered the history of Latvian Skateboarding as a very powerful skateboarder, the first sponsored skater in Latvia (shout out! Clockwise Skateshop) and she filmed RajonTV R.USH HOUR part. Even YT’s 2017 fall edits are available. Inguna has not been seen on the board for some time. Will she come back? <3

I have already finished the article and managed to forget about it, but then I remembered that in this fragmentary historical essay I would like to mention a very special Latvian skateboarder. Many definitely know Ingūna Skujiņa and if they don’t know, then they should know, because Ingūna is a girl who entered the history of Latvian Skateboarding as a very powerful skateboarder, the first sponsored skater in Latvia (shout out! Clockwise Skateshop) and filmed RajonTV RUSH HOUR. Even YT’s 2017 autumn edits are available. Ingūna has not been seen on the board for some time. Will it come back? <3