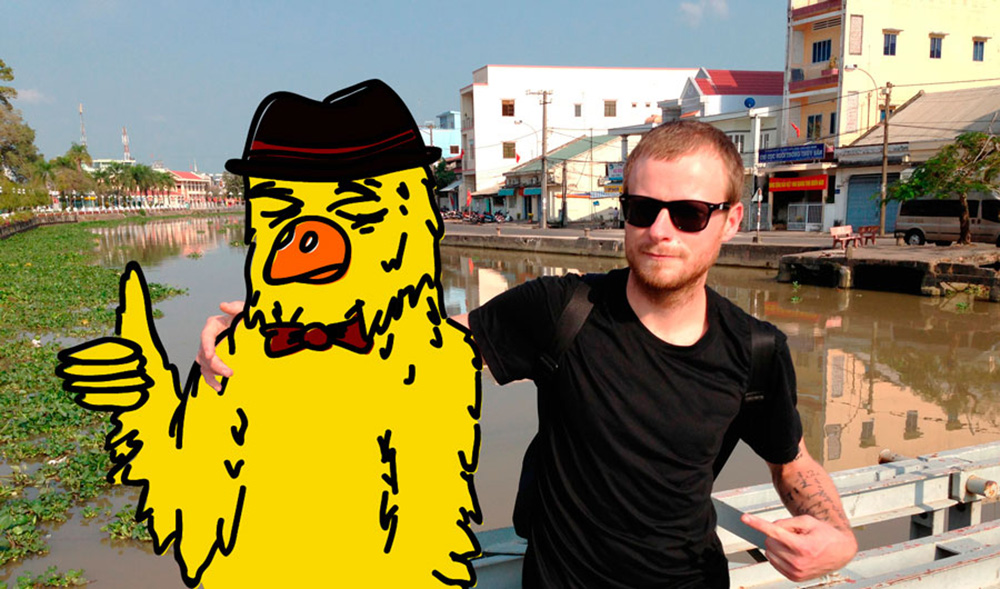 Two years ago I had a chance to show a bit of Riga to Dallas Rockvam and his Finish homies. I took them to my go-to tourist spot – a little bank to slappy curb. Visitors seem to appreciate that spot way more than the locals and so did this crew. Latter, on the way to the bar Dallas commented on my board saying, “This board sux!” I had a Frank board and he was obviously joking, but I didn’t get it and said something like “Ok!” I was a bit nervous to honest and only as we got to Lokal, and got some beers in the system, nervousness passed. We talked about skate vids and Dallas’ previous visit to Riga in 2010.  On that trip Dallas did some really dope stuff – bs 180 on that skinny bank across the street from Boards (the spot is no longer there) and a wallride over the pit at the Teika pool ( there was a video but I can’t find it). I am sure those two above mentioned tricks were never even considered as a possibility by local skaters, for Dallas it seemed playfull and just for fun like nothing. Since then I have a huge respect for the guy and always get stocked on the new clips he puts out. Now Dallas also flows Frank boards to Fricis Štrauss and in that way inderrectly particapates in our scene too. Well, we had a little chat recently and here it is.

Hey Dallas, how are you? How are you holding up during this winter season?
Yo yo,  I am doing OK..  I am home in the forest in Austria and skating 1 time a week in Linz maybe and now I found out how enjoyable snowboarding is, so I plan on doing that as much as I can afford haha.

How did you start skateboarding?
I started to mess around on this Zorlack board my brother had with no grip on it when I was like 13 but then someone stole it and I got some sporting good store board and 2 weeks later that got stolen from the front of my house. A couple of months later I got a Powell angel boy with grind kings for my birthday and its been on ever since.

How did you get sponsored?
I am from a shit hole place called Sioux city Iowa in the middle of the US.  Some friends moved to California when they were 18 and they convinced me to move there to Huntington Beach and this one homie had a camera and I just skated a lot and worked at a supermarket and some Skateshop got my sponsor video he made for me and they gave it to Element rep who came in and so it began.

What was you first trip to Europe like?
First trip to Europe was to Barcelona with Element actually..  they rented an apartment for 1 month and I thought it was fuxing great..  late nights doing whatever and all day skating all these amazing spots..  I came back the next year with friends from the US and again in summer to Finland and every summer after that to Finland and eventually it was like 1 month then 2 months staying then 6 months then I just stayed..  illegally for the first 2/3 years.

What made you want to move here?
It was not like a conscious decision like I planned it.. just happened.. Here in most of Euro land its just different, no car is necessary and you’re not hassled by the police as much for skating and I ended up after a while meeting a girl and now its been like 9 years I kinda stayed and have a son and another kid on the way..  I enjoy this structure way better and its got some negatives but nothing crazy and I can just live and feel more free than when I am at home really.

When did you realize you wanted to start your own company?
It was also not a decision that I really knew I was going to do.. Vntiz who I skated for at the time wanted to start kinda a sister company like anti hero/real has and they wanted to get some riders over to this new one but it evolved and I thought why not just start something totally new and I volunteered to help with team/graphics and some cash and Samu from Finland also helped at first.   It’s about 5 year going now and FRANK is a pain in my ass..  hard guy to work for to be honest.

You said in Free Skate Mag interview that FRANK is not a real company, is it still like that?
Yeah… it’s still fake as fuck…  real ass dudes skating for it but it’s still a joke somehow..  I am not a business nor did I buy some office or do anything like that. Just make graphics and sell the boards if I can.  It functions but let’s see how much longer that old bird can last.

How do you make graphics?
Well they are made in this stupid computer I am using right now after hours of drawing boring shit on paper haha.. FRANK the bird was a drawing by Samu Karvonen actually and I put it in computer. Some more graphics were made by him with me just doing some computer work and now I make most of them and sometimes the homie @zootghost has helped out. I am no artist or anything but when I had a few drinks maybe some very dumb ideas come out and it turns out to be a funny graphic.

Who is FRANK the bird?
Ah shit I kinda already answered this.. To be honest if you think about it FRANK is seen or looks like a male chicken but that is impossible so FRANK is actually a woman chick dressed as a man. Also known as a Transgenderred Chick or Cross dresser or something. I haven’t really got down there to check out the goods, but you know anything is possible these days. hahaha

What hypes you up to skate these days.
That’s a good question..  I liked this blessed video a lot actually…  I enjoy a lot of skating but I am not so much a nerd as I sued to be…  I really enjoy just a good session with homies and I am honestly kinda getting over caring about skating as far as me being apart of it in any way. haha

What kind of stuff do you like to skate?
To me it seems you are into lines. Fux lines really ??  haha I have never or almost never filmed a line with more than 3 tricks or 2 flip tricks in it.. hahaha. I am not that good at skating to be honest or not like this flip in or flip out shit. Last couple years I really like skating tranny and DIY shit! I really like crusty tight shit or some shitty bump.

Is there anything you miis about the states?
Mexican Food!!!!  maybe my brother too and couple homies…  Possibly how fucked up it is in some way too I guess..  haha. it’s a circus over there and just getting more freaky all the time.  hahaha