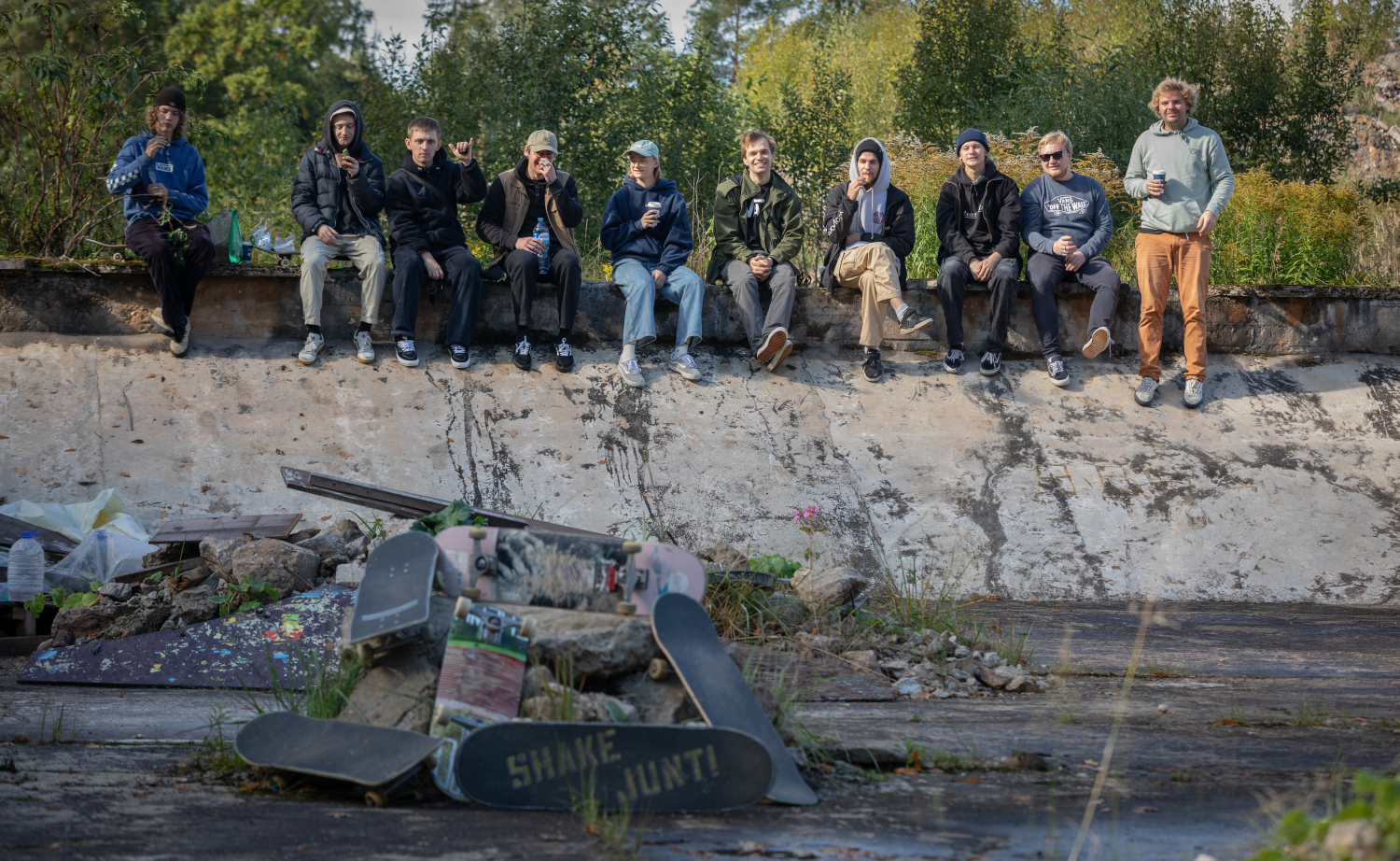 In the dusky days of September Vans Baltics team got together in Riga for a weekend roll out. It was probably the first time Vans did something like that and surely the first time they invited RajonTV to shed a light on their endeavors. A trip article being a standard genre of content in skate media can get repetitive as it often doesn’t tell much rather than “we skated this spot and it was sick.” So instead of telling how we skated at VEF DIY, Maxlas, Rainis, hid from the rain in Isolator, went to Kemeri DIY, and some spots around Jurmala, we instead ask the Vans Baltics team to interview each other about the trip and whatever else interests them. In that way you could get to know the team a bit better and they could also connect a bit more.

All photos by Herbe aka adfotografijas

When did you start skating and what was the reason why? What influenced you to get a skateboard and go outside with it?
I started skateboarding back in 2011, I was about 10 years old back then. I always had an interest in sports as a kid, especially the kind that involved a lot of adrenaline. My first skateboard was a cheap one that I borrowed from my classmate for a week or two, it  had a sick graphic of an alien on the bottom of it. Some time after that I got my first very own skateboard. Started attending skate lessons in Pääsküla and Gruuvi skatepark.. the good old.  Loved it.

Now that you’ve been to Latvia a couple of times, could you compare the Latvian and Estonian skate scenes? What is the same, what’s different and what do you like about each of them?
I’ve been to Latvia four times this year already, surprisingly enough. The first time was during the VEF DIY season opener jam in spring—that had an epic afterparty too!

From what I’ve gathered, Estonian skaters compared to Latvian skaters seem to be a little more polished in a way. I mean that in the sense of style, trick selection and personalities in general. Latvian skaters have a special raw energy to them, differing from the more reserved personalities of us Estonians. A lot of bonelesses and grass skating from Latvia. That’s sick.

Another thing I appreciate when skating in Latvia is the great design of parks built by Mind Work Ramps. Visiting the skateparks in Kauguri and Valmiera was truly a breath of fresh air. Gotta appreciate all the greenery too.

Latvia and Estonia, in a wider sense the Baltics in general, have a  connection in the skateboarding communes that we should preserve and grow. It’s a special kind of energy. We should keep visiting each other’s skating events and film more joint projects.

Where would you like to go on your next skate trip with the VANS Baltic team and why?
Inside the Baltics, definitely Lithuanian cities. Had the opportunity to travel through Klaipeda, Kaunas and Vilnius during the summer. Would love to have more time skating there.

Outside the Baltics, many many places are enticing. Berlin, Barcelona, Malmö, you name it.

What was the worst part of the trip?
Getting rained out quite often. That always sucks. But we managed pretty good even with the rain.

Who is a better driver me [Niklavs] or Romario? [editor’s note: Niklavs and Rommi shared driver duties in the van] I think Niklavs is better. Although Romario’s father is a driving instructor, it feels kinda sketchy for me.

How do you prefer your kebab box?
Spicy for sure. When you have doubts in quality always go for spicy haha.

What’s your favorite trick?
I don’t have a one favorite trick but fs crooked/bs overcrooked (flip in flip out) and the same for fs feeble/bs smith. Also bs bigspin is fun. Every trick I land perfect is my favorite trick pretty much.

What’s the funniest thing you have seen?
So we were having a breakfast during a south Estonian festival called “Intsikurmu” and this kid comes up holding a children car chair which was attached to his body (?). Suddenly he threw it down the grass gap and because it was attached to his body, he flew with it. That was so funny and random. I also filmed it (can send the video).

Why Riga?
Why Riga what?

You have experience previously working as a store manager for Vans and currently as a marketing specialist for Ballzy and Vans. What insight has your work experience given you regarding the skateboarding industry in the Baltics? What are some things that a casual skater might be surprised by?
Well, first of all I would like to say that skateboarding industry is complicated overall. It is a dope culture and everyone who is in it feels the friendship and support from other members. It has a huge potential to grow, but its unclear if the growth would be good, because skateboarding could possibly lose its identity. I hope that it grows in Baltics, but just in the right direction.  The one thing that maybe some skaters don’t know is how many people try to get sponsored and contact the brands. It’s interesting to see different approaches, and all the stuff they send in.

The recent trip to Riga and Jurmala was short and sweet, packing a lot of adventure into the space of 2 days. What was the most memorable about it to you?
How I broke the board in the end haha. Well probably because it was the last highlight that happened. But overall I took away so many emotions from this trip, how you can wake up tired as fuck but when you see that someone is starting to fire up, you receive a boost as well and the fun continues. Stuff like that.

If you could have a professional career in any sport aside from skateboarding, which one would you pick and why?
My favorite sport besides skateboarding is ice hockey, so I probably would go with that. It’s just a beautiful game with lots of intensity, challenges. Something that needs a lot of skill and a lot of team effort. Maybe in next life.

Secret for poping so high so easily?
No secrets, just trying to be as explosive as possible with as little amount of the back foot on the tail, so it gets out of the way asap.

Has wearing a vans bmx vest improved your bike skills?
No, not really, I am the worst at BMX. At least I look like my grandfather with the vest. RIP my dawg.

Favourite spot in Riga?
This is harder to answer than I thought, probably ISO.

What’s your favorite Vans shoe and why?
Vans Era pro – made for my feet, I can skate them right out of box.

What is your dream trick in the streets (spot+trick)
Earlygrab 360 down turtle 4 stair. [Editor’s note – Karlis sprained his ankle on this one during the trip]

Which obstacle you like the most that you have built and why?
The glass quarter pipe by the art museum because it took me through a serious journey for realization.

How do you feel being together with all the Vans homies?
Spending time with all the vans homies is amazing. They all are very interesting people and I have a lot to learn from them.

What would you like on your next trip?
I would want the next trip to be a little bit longer and it would be perfect if we manage to have a great weather.

What would you like to do for the next trip?
It will be cool to check Lithuanian spots.

Would you change anything from the last trip, if yes then what?
Skate for two more days and make some tour afterparty.