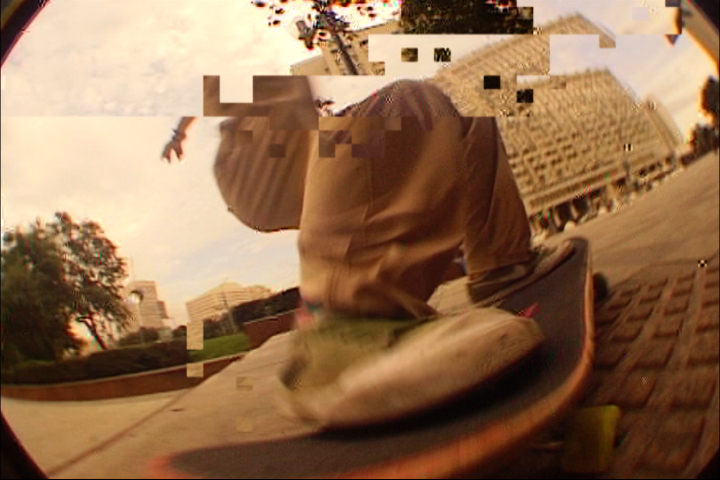 We all got hooked by skating at some point in our lives. We saw it, tried it and it clicked. The act hooked the most, but the more we got into it, the more we realized how much broader skateboarding can be. It turned out there is a bunch of other cool stuff inside. The more light-hearted ones couldn’t resist. They got lured in this deeper skate world and turned into selfless skate servants: the unsettled elves who push the wheel of skateboarding forward spending sleepless nights creating all the rad things around skating. People devote themselves to building spots, parks and scenes. Taking photos, writing, creating mags. Running companies, making graphics and designing products. All of our favorite things in skating are made by some excited fanatics.

The focus of our attention are the weirder ones of them – the filmers. They volunteer to film for the duration of the whole session and skate only when they film lines or rolling longlens shots. Then they spend hours, days, weeks, sometimes even years to make skate edits that would only make people happy for a brief moment. In the good case scenario. Yet the work of filmers has undeniable value. Filmers are often the ones who create a platform for skateboarders to showcase their talents. If it wasn’t for passionate filmers a lot of skate talent would be overlooked or not noticed. Filmers are the essential link between skate communities and often times only through videos we learn about distant scenes and spots. A good video can encourage you to come over and meet the crews you saw in vids.

In this new installment we would like to celebrate the work of Filmers Worldwide! Tell their stories, show their vids and nerd out on their preferred aspect ratios. We contacted a filmer from Saint Petersbug, Russia who makes fast paced and intense edits. His crew is called SPAM (ru -СПАМ) and they recently released a video called Liquids.

How long have you been skateboarding and filming?
Yo, my name is Nik and I am a regular VX filmer, but from Saint-Petersburg, Russia. I’m 27 years old. Been skating for 13 years and filming editing for 9-10.

How did you get into filming?
When EA Skate came out on Xbox360, I told my father that I really want an Xbox and this game. Everything turned out well and I got it! I played the game and edited the video in it. There was a filmerpack that allowed you to make a real fisheye or move the camera like a real filmer, shoot from different angles. I made about 50 videos like that, I don’t even remember exactly how many. Slowly, I learned how to edit video, then I collected a budget for a canon 500d for my birthday, again thanks to my mother : – *, at that time it seemed like an unreal camera with the ability to shoot video from a large matrix. 720p 30fps! it was cool!

What is it like skating in Saint-Petersburg? How big is the scene there?
Petersburg is the best city, it is moderately quiet for a moderate metropolis. The weather is terrible though. Spot wise we have a lot of curbs and ledges, all sorts of stepups, new benches. Every year at least one or two new spots appear.  But it is awesome here. I guess it is good anywhere as long as your guys are there, I do not need anything except flat in order to enjoy skating. There are many skaters here, all kinds of crews! Deers, and frogs, and pigs, and sea cucumbers.

What is SPAM?
We skate and jump around, nothing special. We move ourselves, others move. We don’t even have an accurate team or something. We don’t do any kind of welcome to the “team”. We are just moving, shooting something, hanging out.

You have a pretty intense filming style. Is there any filmer that inspired you to film like that?
I think it all started with the switch to VX in 2014-2015. In particular, I began to shoot closer and a little faster, but I got the basic body movements from Colin Reed, Magenta vids and Chris Thiessen in particular. I just liked this style and that’s all. At the moment, I think that sometimes I even overdo it, but in general – fuck it.

What do you think being close to the skater adds to a video?
For me, this is actually a variety of filming. Honestly, it would be easier to shoot from afar on HD. But I feel some kind of charm in this and that there is my “trick” with such a shot too. It is especially cool when the line is difficult, not because it is technically difficult, but because it is difficult to shoot it close and ride the entire distance. You divide the line into parts, look for moments where you grab the board and when to throw it, where to push more times so that the skater is in the frame. Remotely it might  seem to be just filming, but in fact you often have to think through the moments: where to go, where to take the camera, where to start, and how to pull it at a certain point in the trick. Sometimes it works out, and sometimes you fuck up. Shooting in parks with transition or all sorts of steps, stairs, is a pleasure.

We’ve seen that you film for Russian skateboarding federation, so is skateboard filming a full time job for you? It looks like you managed to keep your filming style for work as well.
Yes, at the moment I work as the main filmer of the federation, I go anywhere  they call, I film what they say. The fact is that if I couldn’t maintain my style of filming and 4:3, then I would not work. But I definitely would like to say a huge thank you to the Russian Skateboarding Federation for allowing to keep underground style of filming in their videos.

You film with both HD and SD set up, right? What do you like best? What makes you still use SD?
Yes, and VX and HD. In bad weather and for certain projects I use HD. And for good tricks in the sun and at least plus 10 Celsius I use VX. The VX has a golden picture, good sound, it feels good in the hand, and I just want to shoot on this camera. It is all in the aesthetics.

In your HD videos you have 4:3 aspect ratio? Why do you keep it like that?
That’s right, 4:3! Because the only HD format that I want to shoot is the 4:3 format. Purely technically, the image that any lens emits on the matrix is a circle. In the case of fisheye, this is especially noticeable due to the vignette. Accordingly, the closer the format is to the circle (square), the more useful information we can pick up from the fisheye. And the closer we can be. Following this logic, I shoot in 4:3, I like that the skater fits completely, while you are at a distance of 10 cm from the board.  By the way, have you noticed that Liquids is 3:2? 720×480?

I didn’t notice. What is that about?
In fact, I myself do not exactly remember where this style came from, but I suspect that someone in America once made a mistake during montage and created a project in frame size NTSC 720×480, but with square pixels, not NTSC aspect ratio 0.9091, which would give a ratio of 4:3. As a result, I once saw a video in this ratio, a little stretched, I liked it and I use it now.

Do you help skaters come up with ideas for tricks?
I filming everything what the guys want to do, and try to help with the addition of sweets to the trick / line. Sometimes I come up with tricks for the dudes themselves, but still the guys do everything as they want themselves. To me the atmosphere and the trick are most important, but not its complexity.

What is your approach to music selection? Should a song be original and previously unused?
Definitely yes! Music is probably 90 percent of the skatevideo. The track should not be used, or you can use cover of it. I can’t say that I have the perfect choice, but for some reason I really spent a lot of time to find these tracks and to get everything together.

How would you describe your filming to skating ratio? Is it 50/50?
Oh, it is 1 to 99 I would say. Usually no one films me and I just skate. Only this year I managed to finally get something. For the most part I am behind the camera for 99%.

In a conversation we had you mentioned that you were colour blind? How does it affect filming or editing?
There is not so many problems in my daily life. I don’t recognize shades of green and red a bit of purple. It mostly depends on the lighting in the room or in the street. But when I edit it can get harder sometimes to mix clips together. If clips have different colours it can get tricky for me. Sometimes faces become green or red, then I need to call for help. When I film on VX I just make everything yellow, so it is easy. Once I was filming a video for a sibsub skatecamp. They asked me why the video was all red? Was it intentional or by accident? I told them it was intentional! Haha.

Liquids is like a full-length video. What do you think about this format compared to short insta vids?
Liquids looks more like a full length of 2019, but not classic at all. I tried to fit all in 15 minutes, and it worked out. Actually look at instagram, there you can upload only 15 minutes to IGTV. Perfect fitment. I would like to shoot a video for 40 minutes, definitely, but I don’t have enough time, spots, skills. I do not even know. Further it seems to me I can only film for 15-minute videos and that’s enough.

Last words?
Yo everybody, someday we’ll meet. Keep it golden. Don’t forget your tapes and hit it the camera bit on the left side. Forgot your viewfinder? And of course everyone wants to film a long lens shot.