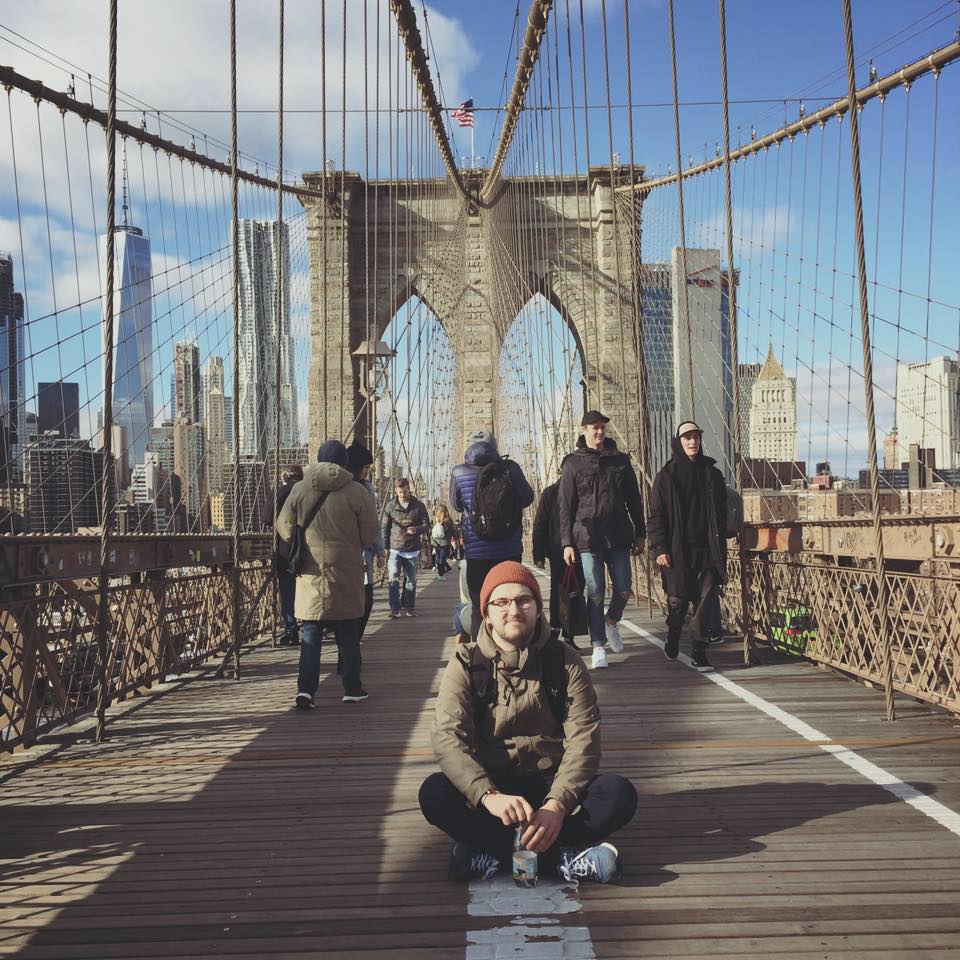 When you start doing something it is good to have a person to look up to. When I got into filming one of the people i looked up to was Toms Bika. Way before I had any clue about cameras and fisheyes, Toms was rocking a proper set up: VX1000  with an MK1 fisheye. He was filming and editing his videos the correct way, with good music and classic filming style. He made a bunch of great Latvian videos that stand out till this day and will stand strong in the future as well. Toms was on a short break from filming, but now he is getting back into it and in the end of the interview you will see his latest edit with Maxims Feofilovs. So here is a talk with Toms about his work and how he got into filming!

Hey Tom, what’s up man? How is it going?
Yo Gaba! Everything’s good man! I’m ready for the interview!

Great! Let’s start from the very beginning, where are from and where did you grow up?
I was born and raised in Riga, Latvia. Lived my whole life in district called Mezciems. One of the more peaceful areas in Riga.

What were you into before starting skateboarding?
Back in a day I played ice hockey for about 4 years. Later on I decided to quit and got really into skateboarding. Didn’t enjoyed hockey that much anymore. But I still sometimes play hockey in winter with homies at a pond.

I’ve seen you play with Armands at Viesturdarz on instagram. So what about skateboarding? How did that happen?
Well that was a long time ago. I think it was in 2005 maybe later. I saw my friend who was riding his skateboard. We went in the same school together. I knew that he was skateboarding for about a year or so. His name is Toms Gabliks a former pro Latvian skateboarder. His skating looked super cool so I decided to give it a try. I remember I bought a cheapest deck available in Grocery store ”Rimi” for 9 Latvian lats. That’s about 15 Euros. Shitty deck with a bad trucks and wheels. I tried to skate, but the trucks and wheels were so bad that couldn’t push. Later on I asked Toms if he could at least give me his old wheels and trucks. Finally there were good trucks, wheels and bearings on my skateboard so that could push around and skate. That’s how it all started!

Yeah we used to do the same in winter. What about filming? How did you start?
One homie from my neighbourhood who also was skating had a small camcorder. He used to film us for quite a while. Then later on I decided to get my own. As long as I remember I got my first camcorder in 2006. Asked my mother if she could get it for birthday. And I was watching a lot of skatevideos also. I watched them really carefully tried to study how filmer was holding his camera, fisheye movements, angles etc. Soon as I got my camera in my hands I knew that this is the thing I want to do!

That’s so sick. Do you have the videos that tour friend filmed? And what were the videos you grew up watching?
I think they are still in my old PC hard drive but I’m not 100% sure. Need to get the adapter so that I can connect it to my Mac. First ever skatevideo that i saw was Sea Side Sk8 video. I will always remember that intro part with that song The Verve – Bittersweet symphony. Legendary! Always get nostalgic when i’m watch that movie. I was mind blown that how good they all skated in that video. My favourite was Zeņa Korzuns aka ”Zenon” part in that video. I also liked all 411, and Transworld videos and some classic movies such as Baker 3, Flip Sorry and many more.

Ohh shit yeah the first seaside movie, you could watch it on tvnet.lv or something like that. That was so sick. So what was the set up you got for your birthday? Did you have a fisheye?
I think it was a small JVC camcorder or something like that. I filmed with it about 2 years I guess. One of my friends gave me this little fisheye who actually was a door eye if you know what I mean. That’s the thing where you can look through it and know who’s knocking on your door haha. I don’t know how but it actually worked pretty fine. In 2008 I finally ordered a VX1000 with Century MK1 fisheye from Ebay. I remember that I bought it from a UK filmer who said that he wants to upgrade to HD. When the camera arrived it was so cool holding it in your hands because I was dreaming of having that camera for so long. My old VX died a couple of years ago, but now I have another one in a decent condition.

Shit, that must have cost you a fortune. Wait Fricis told me you had a fisheye that traveled from SeaSideSk8 to you. Tell about that
Oh Yeah! Fisheye that I got travelled around Latvian skaters a lot. First I heard that it was Sea side sk8 filmer lens. One guy from their crew sold it to the next guy and then I got it from Ansis for 30 lats. After that I gave to Mason aka Berjoza. Now I think he is still filming with it.

So the first videos you filmed were with Toms Gabliks? Tell about him a bit and who else was in your crew back then?
Yap! Our crew was named “Greenwoodsk8” there were 4 skaters: Roberts Krūms, Armands Izinkēvičs, Normunds Cīrulis and Toms Gabliks. I can say that Gabliks was the captain of our crew hah. Skated really good had a great style and was the only dude who was sponsored. Later he even was a pro for Aste skateboards. They sent him a lot decks wheels and other stuff. He was the first ever who was sponsored by a skateboard company in Latvia.

Those times were sick. I remember one video with that Baracuda song. That was the greenwoodsk8 video right?
Yeah the one and only skatevideo I made for our crew. I wish someday maybe we can make another one, but unfortunately Toms is not skating anymore. He in political world right now. Good for him. Normunds is studying in University. Roberts and Armands are the only ones skating. Those were the good times I will remember for the rest of my life.

Yeah that vid is really goof, Armands’ kickflip and Toms’ footage was really good too. I also remember you filming with Rudolfs Henchels a lot, how did you guys started hanging out?
He was working in Ripo Skateshop back in a days and Gabliks introduced me to him. We went to Barcelona in 2008 on a small trip. Me, Zenons Dainis Silinš, Rudolfs and Gabliks. Had a great time there. I filmed a small edit for Rudolfs there. Then later he asked me if I want to film a full part for him. Of course I agreed. He named the part : “Ir Kaut Ko”. The premiere was held in a legendary place called K-suns movie theatre.

Oh yeah I remember that, how long did it take you to film? Any funny stories of Rudolfs?
It took about 2 years to film that part. Started filming in 2010. Rudolfs is a funny dude. Always has some funny things to say. I don’t know if its gonna be appropriate to say because it’s a rude joke. A lot of youngsters are gonna be reading this interview.

I can imagine. Did you ever worked as a skate filmer? Did anybody pay you back then?
That would be so cool if you could make money for filming only skateboarding. In Latvia it’s impossible to work only as a skate filmer because the market is really small and skate shops aren’t interested of paying you monthly. They give you free stuff instead. In Europe or America now that’s another story. Let’s hope that one day this will change.

Yeah let’s hope. What was your next project after Rodolfs’ part?
Clockwise “Get shit done” was my next project. It was my biggest, proudest and longest project I have ever done in my life this far. It took about 3 years to make this movie. That was a hell of a journey through out those years. Good times! Marcis and Gizmo were those guys who asked me if I want to make some clips for Clockwise skateshop. I agreed! It turned out to be one of the best movies so far in Latvia.

That was an awesome work Tom, I remember the premiere, it was super sick. How would you describe your approach to filming? What is a good clip to you?
That’s a hard question. Each filmer has his own approach. I havent thought about mine. I just go and film clips. It happens naturally. A good clip must contain good angle that’s the most important part and of course for me it’s also how good the spot looks visually.

Which clips are you most proud of from Get Shit Done movie?
What comes to mind is the last Barcelona footy because it was the last trip that we went before I started editing. We got a lot of good clips. But above all i’m the most proud of all Clockwise guys. They did an amazing job. Blood and sweat.

What is happening now? You kinda stopped filming for while, what is up with that?
I decided to take a little break because I was filming for so long. Got little bit tired of routine. And also my old VX died. Couple of months ago I bought a VX again. Right now i’m filming just random skateboarding and collecting good clips for better days.

We hope to see some more edits from you soon. What hypes you up these days? What kind of skating are you into?
Well pretty much everything. I like all sorts of skateboarding stuff. Technical skateboarding was always my favourite to watch. I was in Barca couple years ago and we were sitting in Macba spot with Clockwise homies sippin some beers. Flo Marfaing was rippin that day That was first time I saw him skating. He did switch bigspin front noseslide shuvit body varial out in line! It was so crazy to see that and how easy it looked in real life.

Any last words?
Life is life enjoy it while you can.