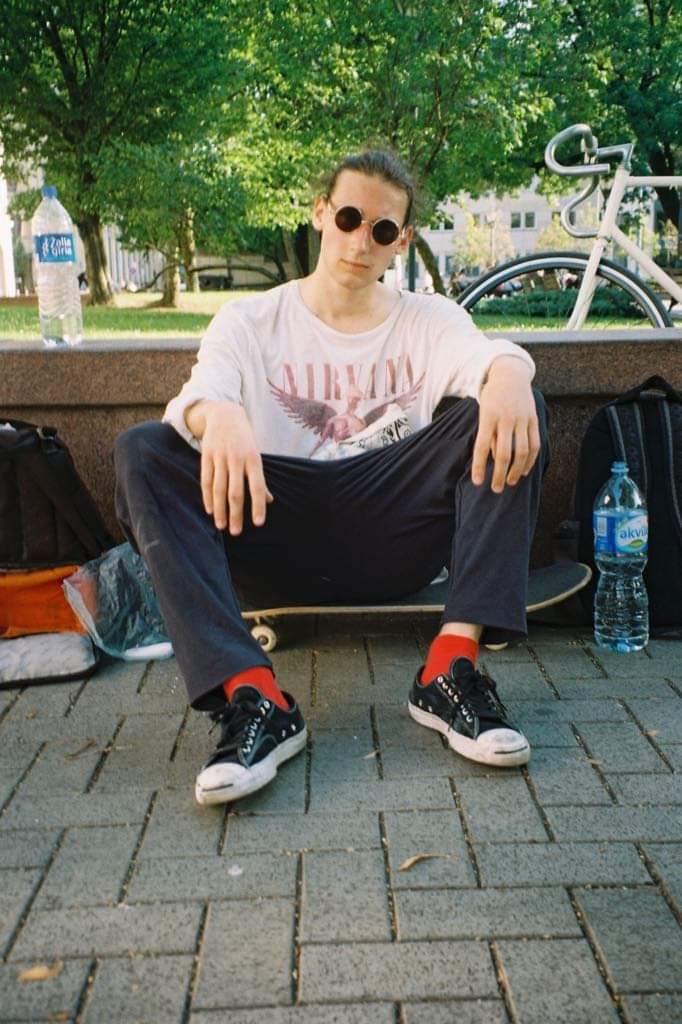 Mantas at the spot

Skating one and the same spot all the time can generate new ideas. If you are at a spot for one day you might not notice all the lines or possibilities that locals see. Locals know their spots inside out; they see hidden obstacles and have lines visitors might not figure out at first. You got to spend some time skating a spot to film something worthy there. And spot centered videos challenge skaters to be original at the same old plazas. Like for example the London’s Atlantic Drift crew at St. Paul’s Cathedral, Bobby Worrest at Pulaski, or Mike Arnold at Lloyds. All of these videos thrive creativity as well as keep these places energised.

As for the Baltics, we also have plazas that deserve to be represented and have videos centered around them. Tallinn has Freedom square. Riga has LNB.  And VIlnius has Vincas Kudirka Square which was the  focus for Mantas Vaškelaitis. Mantas is a Vilnius local, who has put out a part filmed at the main OG plaza in Lithuania. We talked to Mantas about that.

Hello Mantas. Congrats with the part! How did it all came about?
Wassup Rajon, thanks! Basically I always wanted to film something raw and true. Some vx lines and everything. The first time I saw my bro’s Christoph’s video “Pfusch”I got super hyped on his filming, I also figured that filming with him would be just perfect. And he actually wrote his master’s thesis on skatevideos haha. Yeah I really wanted to do something with him.

What can you tell us about Kudirka’s square?
Kudirka’s square is probably the most iconic skate spot in Lithuania, there used to be hundreds of skaters skating there when I was a kid. I always loved the spot. It’s true that everyone had already filmed the shit out of that spot but I wanted to something different at least some kind of different soundtrack haha.

So that being said, the first place we started filming with Christoph was Kudirka’s square. We filmed like 3 lines and some other shit on that day. It’s was so fun filming there, just doing whatever, not putting that much though into it. Yeah so we figured why not film the whole part there. Just like Jacopo Carozzi did in the iconic stazione centrale in Milan.

How long did it take you guys to film it?
We spent like 3 full days in total at the square and became Kudirka’s locals. Just doing fun stuff like slappy grinds ahh it was fun indeed. It wasn’t work, it was play. Watching the video now I only get positive vibes- looking forward to film more with the filmer. By the way, he calls his videos “pfusch” which means “bullshit” in german. That’s that attitude I love.

What is the atmosphere at the spot?
You can find everything there- ledges, rails, stairs, flat is good as well but it used to be even better. This spot has gone through multiple skate eras. When I was little, there would be cops showing around quite often. I even remember the legend of the red (I think) bus, which would arrive with a bunch of cops inside and bust as much of skaters as possible. I remember myself having a spot to hide in that case- everytime the cops would come, I would run to the underground parking below the square and hide behind cars there. On the other hand, one of the former mayors of Vilnius has intentionally put rails on the ledges so that they wouldn’t get damaged. This is, of course awesome because now we have ledges AND rails hah. Generally, there have been times when skating was super illegal at Kudirka’s square and also times when we were free to do whatever we want. As for now, cops rarely come- they’re quite tolerant towards us. However, I hate the little gopnik kids that hand out there: smoking cigs, drinking buzz, playing some moroz music while their shitty BMWs (or motorcycles- “pyrdas” as we call them) are next to them. This is the only thing I don’t like in Kudirka’s square I guess- everything else is perfect! Come skate with us